I've been working on learning Japanese for a while, and recently I've started learning kanji!
My plan is to learn the radicals first, since two-hundred characters is much easier to tackle than two-thousand. I'm slowly adding them to my anki deck, and here's what I'm working on so far!

I'm also going to start playing a game called "Learn Japanese to Survive! - Kanji Battle", which will hopefully help me learn them in a fun way! Because I've learned that associating words with something, helps you remember! Like one handy trick that's helped me, is watching My Hero Academia. A lot of the characters names are very on the nose, such as the main character's last name. Here he is, and his last name is Midoriya 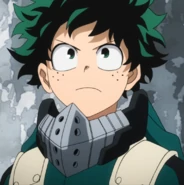 Midori in Japanese, means green! So it matches his green hair.
There's also another character who's name is Kaminari. His superpower is creating electricity, and in Japanese the word for lightning is "Kaminari"!
There's several other characters like this, who's names match something about them.